Road to the Horse was guaranteed to make history and it did not disappoint. Fans travelled from around the world to witness master horseman Chris Cox accumulate his unprecedented fourth Road to the Horse World Championship. A sold out crowd in the Alltech Arena at the Kentucky Horse Park was on the edge of their seats while each competitor piloted two 6666 Ranch bred geldings through the final obstacle course, chasing a record setting $100,000 purse.

“I am so proud of the evolution of Road to the Horse. Now, thirteen years in the making, we have sold out arenas, pushed the boundaries, set records and became the world’s most anticipated equine event” states Road to the Horse Owner and Producer Tootie Bland. “For the very first time, we will take to the air on RFD-TV April 1, 2015. We have the privilege of bringing millions of fans the phenomenal horsemanship of Road to the Horse, as Chris Cox proves on not only one colt, but two, that he is a master of colt starting.”

Barbara Cox served as Cox’s Pen Wrangler throughout the competition and his children, Charley and Case, joined him during his riding demonstration at the event. His young daughter Charley Cox had the privilege of presenting her father with the 2015 World Championship Gist buckle.

Fans watched Trevor Carter take the 2015 Ram Trucks Wildcard Championship title prior to the main competition. Carter and his 6666 Ranch bred gelding Royal Wall (aka Sailor) were also rewarded Fan Favorite honors after thousands of fans cast their votes over 24 hours. Carter made his way straight to the WW Livestock Systems round pen after only minutes of hearing the results.

Both Trevor Carter and Road to the Horse 2014 World Champion Jim Anderson had colts that challenged their colt starting skills, which treated the fans to an amazing display of horsemanship throughout the weekend. 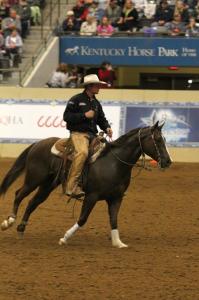 Chris Cox led the competition after Round 1 and continued to hold that position until the very end, finishing with a total accumulative score of 2600. Jim Anderson finished second with 1689 and Wildcard Champion Trevor Carter was close behind with 1656.