Vicki Wilson takes the title at Road to the Horse 2017 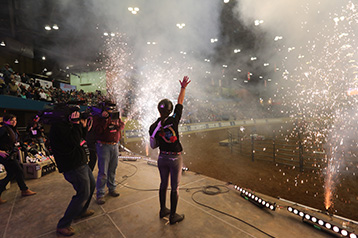 In the closest scoring competition in the history of the event, less than approximately 8 points per judge separated each competitor. There was no mistaking, Vicki Wilson was different but there wasn’t any doubting her horsemanship. Wilson was not only the first competitor from New Zealand, she was the first competitor from an English discipline to not only compete but to walk away with the coveted World Championship of Colt Starting title.

“This isn’t about being a cowgirl anymore, it’s all about horsemanship” stated the first lady of Road to the Horse, Stacy Westfall, as the competition moved into the final round on Day 3.

Wilson’s Road to the Horse journey was far from scripted. After dislocating her left shoulder during Round 1, many fans were unsure if she could even continue. She didn’t just continue, she shined. Wilson may have had to alter her strategy with her 6666 Ranch bred colt Boon River Lad, who she fondly named ‘Kentucky’, but she continued with the grace and grit of a champion. This cowgirl may have had a broken wing, but she certainly showed ‘Kentucky’ how to fly.

“My shoulder is sore but when you walk out there, the atmosphere, the people, everything about it, you don’t even think about it. He didn’t quit and I didn’t quit, that’s what being a cowgirl is all about. I believe our job as riders and trainers around the world is to inspire the next generation, to get kids to believe that anything is possible in this life and if we want something bad enough, you have to work hard and be prepared to sacrifice and chase those dreams” Wilson stated as she admired her Gist Silversmith Championship buckle. “Never stop chasing dreams.”

It’s almost a tradition that the winner of Road to the Horse chooses to purchase their colt to continue their training, Wilson didn’t break tradition.

“Yes, ‘Kentucky’ is coming back to New Zealand. It’s a bit of a trip for him, but he deserves it. He will become a new demo and clinic pony, he loves his jumping, so that is something we will develop. He is going to be a pretty cool kid.”

Media photos are available from Road to the Horse 2017, please email tammy@roadtothehorse.com for details.